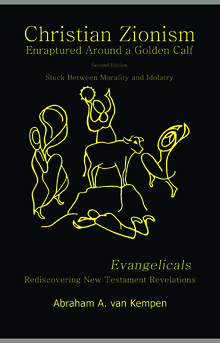 When asked on my first day in kindergarten, ‘where were you born,’ I sparkled with pride: ‘Palestina!’ Palestina sounded so exotic. Later, I realized I was born as a refugee, on a British ship on the outskirts of Israel-Palestine. To complicate matters, I was born a Jew in Palestine. My mother was Jew. The region is home. Inside my soul and within all of my being, I am attached to the splendor of its many colors, their tints and hues. I understand why neither the Palestinians nor the Israelis will ever leave. My story is the story of many Jews. We are blessed with diversity. That we are one, immortal tribe, exclusively begotten from the seeds of Abraham is spiritual. Physically, it is improbable. Nonetheless, myths abound. What is not mythical is that many indigenous Palestinians are more genetically linked to the Ancient Israelites than most European Jews who wandered into the Region, especially after World War II. ‘Christian Zionism … Enraptured Around a Golden Calf’ pits the Holy Trinity of Zionism – One People, One Land, One God – against the Holy Trinity of Christianity. Jesus the Messiah redeems and ‘in-gathers’ ALL people, not just one tribe; ALL the nations, not just one state; indeed, glorifying the one ‘I Am' with many names, including Eloah, in Hebrew and Allah, in Arabic. “The ‘Promised Land,’” says Jesus Christ, the Messiah, God in the flesh, “is the spiritual kingdom of God, a ‘Land without borders.’” The Deed of Trust, the Title of Ownership, of your piece in the Promised Land is vested in the New Testament, inscribed in blood on Calvary. Our New Covenant for Gentiles and Jews alike, 1) frees Modern Jews from their ancestral complex; 2) disclaims Modern Israel's obsession for possession of a Land no longer promised; and, 3) rejects the Israeli edict: "What is mine is mine, what is yours is mine also." Will a shared identity prompt the ‘cousins’ to share the land? Will Evangelicals rediscover New Testament Revelations?