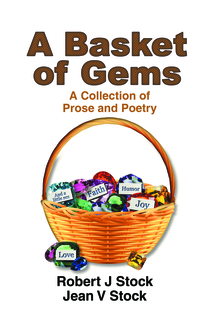 A Basket of Gems: A Collection of Prose and Poetry by Robert J Stock & Jean V Stock

When Jean Stock (Jean Veil) was secretary to the supervising principal of the high school, she became Bob's steady girl friend while he was still a member of the senior class. They were married two years later when Bob was in the Army, had seventy years together and adopted four children. While Bob was working for G.E., Jean worked as a secretary for G.E. part time. She also worked as a bank teller.

The only formal education either had in writing was a night course in creative writing they took early in their marriage. This book grew from that course and their love for each other through the years.