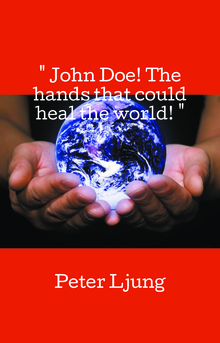 " John Doe! The hands that could heal the world! "

Perfect in every way!
John Doe! The man that was. No one knew where he came from, no one knew his real name. Police at the precinct gave him that name, as unknowns are automaticaly labeled that way. With no memory, and a perfect body, he looked like a brightly coloured rare rose in a world of thorns.

It was in the asylum that people noticed something odd going on. Insane people were acting sane! The worst of the crazies were acting normal.

Only a short time passed, and a strange power so great, revealed itself to the world. Word spread like wild fire in the jungle of life.

In the spy glass of religion, church elders kept their curious eyes fixated on events that were mystifying the world. Who was this perfectly looking man with no name? Why was he here? What was the end purpose?

Good in people surface, but at the same time, evil plays it´s part just like it always has.
Taking John Doe around the world, this wonderful power he was showing to the world, was just about to bring him down to his knees.

Should he continue to share this power? should he stop, then fade into the unknown? Maybe he would leave to go to where he came from, or maybe, the unthinkable was just about to happen!